World War II greatly affected many nations, but Germany was one of the hardest hit countries both financially and physically.  Most of their money was being geared towards military defenses to fight multiple battle fronts.  Cities were air raided and families were uprooted from their homes.  Helga Straif-Taylor was only a child at the time of the actual war, but she also experienced the aftermath of WWII, which is why she now resides in the United States. 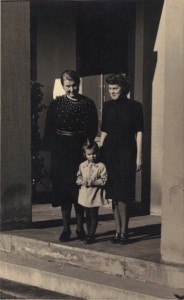 While interviewing Ms. Straif-Taylor, she could recall the air raid sirens going off both day and night to warn the civilians when the bomber planes were flying in their general direction.  They never knew whether they would be bombed or whether the planes were just flying over to the next city.  She and her family would hear the sirens, get clothed, and go to the porch, or what she called the veranda, and watch the planes fly over. After they flew by they went on with their normal lives. Being that they lived in a park, they never thought their house would ever be hit and therefore would usually go to their root cellar. One night Ms. Straif-Taylor had already fallen asleep and was woken up by a large boom. She said that it was one of the loudest sounds that she had ever heard.  Her mother and father took her into their cellar and made her go back to sleep, but as more bombs were being dropped she could feel the house shake and saw the canned goods drop to the ground. Afterwards, the family walked up to the living room to find that what used to be the back of their stone house was now their back lawn. The park house had not been the target, but a near by rail road carrying supplies was. After that trauma, the family decided that going to the local bomb shelter was safer than their cellar.  The next time they were bombed, she remembered going to the bomb shelter with many other people from around her house.  Later in the night, when the air raid was over, her family came back to find that their house was up in flames.

In 1956, when Helga Straif-Taylor was only 17 years old, she decided to travel to the United States to visit her sister Charlotte and her sister’s husband David. She took a ship, called the Maasdam, over to New York; however, she did not pass through Ellis Island because it had been shut down by then.  She was then placed into a hotel room with another German woman for a night.  The next day she was put on an airplane flight for Seattle, Washington where she would meet up with her sister.  Once in the United States, Helga realized that she preferred the life style here and decided to stay permanently.  A year later she applied for her Visa.

She walked every day to her first job at the Motor Vehicle Building where she served as a clerk.  While in Washington, Helga also met her future husband, Frank Taylor, in a parade.  She married Frank in 1950 and had her first child in 1959.  In 1961, Helga received her license. She applied for citizenship and after a five year wait, Helga was granted citizenship to the U.S. in 1965. 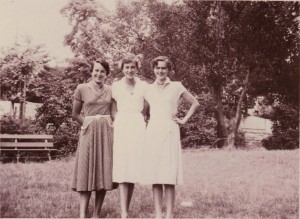 Having experienced what she did when she was a child, Helga overcame many obstacles.  She made a new life for herself by taking the initiative to change her lifestyle.  Her story is inspiring and she seems to be happy with her choices.  She had the chance for a new beginning and took advantage of it.

One thought on “Helga Straif-Taylor”