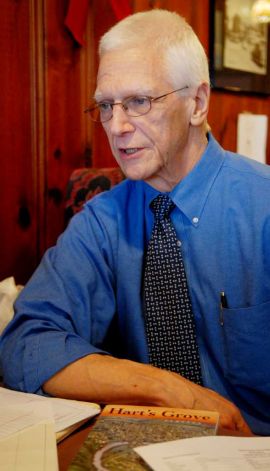 “Goosey goosey gander where shall I wander, upstairs, downstairs, in my lady’s chamber. There I met an old man who wouldn’t say his prayers, I took him by the left leg and threw him down the stairs.” This is just a taste of what was written by Dennis McFadden in his work Hart’s Grove.  Dennis McFadden grew up in a small town in Pennsylvania. The stories in the book take place in Hart’s Grove, Pennsylvania, which is based on the hometown he grew up in. In Hart’s Grove the characters all are just ordinary people living their day to day lives, but all of their lives take huge turns influenced by situations and events that are tragic and funny.

According to Dennis, “There weren’t many books around my place when I was a kid. Nobody’d gone to college. Dad told a few bad jokes when he was drunk, but no bedtime stories. I remember getting my hands on some Hardy Boys books, and enjoying them, and when I was 15, I picked up a paperback called Boy with a Gun.

Dennis McFadden began writing when he was in kindergarten. He began to write fiction when he was a junior in high school. He first started writing because he read fiction novels and he said, “it seemed cool.” He had the opportunity to write a fiction story when he was a junior and he enjoyed it. He had a lot of positive feedback from his teachers, which he said “helps a lot.” Dennis McFadden said the teachers loved his writing. “I wrote to the author, James Dean Sanderson, and asked him, and he actually wrote back! I tore open the envelope, about to have all my questions answered, all the mysteries revealed. But he didn’t tell me a thing. He was flattered, he said, that the book affected me that way. He suggested I write an ending. I should write the ending! I should talk to my English teacher—I might even be able to earn credit for it.”

“So why didn’t I go back to writing novels? Oh…just thinking out loud here…maybe because I hadn’t had one published yet? Just a thought. Maybe because I was getting older now, the green banana syndrome, hesitant to begin any two year projects? Maybe because I loved the high of finishing a story and craved it more often? I became addicted, jonesing for finishes.”

Dennis McFadden didn’t start out planning to publish a book like Hart’s Grove.  The stories were published individually in magazines and journals over many years. It is a lot of hard work and it is very difficult to even get books published, so it’s a huge accomplishment for him.  Another honor was having one of the stories in Hart’s Grove, “Diamond Alley,” chosen for The Best American Mystery Stories of 2011.  McFadden is currently in the middle of writing another book. It’s an historical novel that takes place in 1857, set in Hart’s Grove.  In this new novel,  as with other stories he’s written, some of the characters are based on real people who are involved with his life. 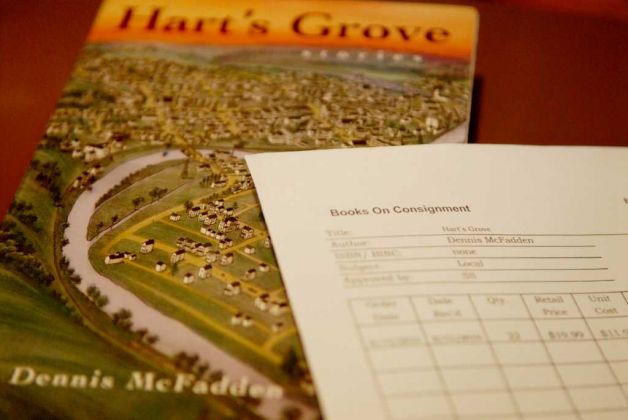 “Ideas can come from anywhere,” said McFadden. They could come from an interesting character, interesting event.  Sometimes they present themselves and sometimes you have to think really, really hard.”  Many things inspire him every day. His granddaughter, Bridgid, always inspires him. Sometimes he will start with a character and throw them into a plot or a situation and just see what happens and where it takes him.

Dennis McFadden is a realistic writer. He prefers to write straight realism from real life situations. He writes what he reads. Dennis McFadden reads mostly short stories rather than novels. He said “you wanna read what you write.”  In the future, McFadden would like to see another book or two published. He’s getting older and he never expected to make a living out of writing. He wants to publish at least one more successful writing piece before senility sets in.

Dennis McFadden has written many short stories and won different awards for them leading to the publication of his book. This goes to show that a small town boy can be a big town icon.  Luckily, we have the privilege of him living in our small town and have enjoyed getting to know him. We can’t wait to see what he has in store for us next.

One thought on “Dennis McFadden”