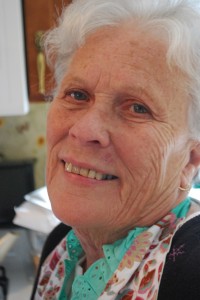 Picture this; an old woman knitting a blanket for a family member, with love in every stitch. It’s a very classic sight. But Dolores Belanger of Colonie knits quite different objects than the usual blanket or scarf. She chooses to put her “stitches of love” to different use; knitting hats for newborn babies at Saint Peter’s Hospital in Albany, NY. These hats are placed upon newborns’ heads after they’re born to keep their body heat in, and with Dolores on the job, St. Peter’s is never short. I had a chance to sit down with Dolores, or Grandma as I call her, and ask her about her experience of knitting these caps.

Dolores first found out about these caps about a year ago from her daughter, Michele, who’d known a coworker who knit the newborn caps as well. Dolores happened to be looking for a hobby to take up her free time and felt that this would be a good way to give her something to do, as well as help people.

“I like doing things for other people,” Dolores says about taking on the project. She doesn’t get paid for it, but instead does it simply out of the goodness of her heart and her desire to help others.

Making these special caps is nothing one can just whip up without having guidelines, though. The hospital has a list of guidelines and rules to follow while making the caps, and Dolores must follow them specifically for the caps to be accepted. Generally she creates all white caps with two strips at the top, consisting of one of two colors; blue or pink. Obviously blue is for a baby boy, and pink is for a baby girl. Taking about two days to make a cap, sporadically of course, Dolores knits back and forth in a sort of spiral or circle pattern, with the stitches being 5 ½’’, just as the guidelines state. These stitches progressively become smaller as she reaches the top, until she finally binds it all together and creates a petite newborn cap. All in all, the hospital requires that there be 54 stitches in each cap, and Dolores sticks to these rules to make each cap perfect. Once these are finished and she has six blue and six pink hats, twelve total, she gives them to her other daughter, a nurse at St. Peter’s Hospital, who then brings them to the volunteer office where they will be distributed to the new lives that are soon to be born at the hospital.

After knitting over 1,200 of these newborn caps in just over a year now, with love in every stitch, Dolores still continues. A picture of the first baby born in the Capital Region in 2010 printed in the Times Union newspaper even showed the baby wearing one of her caps, with her signature double stripes. Sometimes, after finishing a hat she’ll even say a prayer for whoever gets the cap, praying that they will be of good health and mind, which is one of the most memorable parts of her whole experience.

“Knowing that I’m helping somebody else is the most rewarding part of it all,” Dolores states. She obviously cares deeply for not only the quality of her work, but about the families who will receive the caps in the near future as well, for they are her true motivation for her knitting the caps.

Overall, the most important part of making these caps for Dolores is that it feels rewarding to her because of the fact that they helped another family and a small new life being brought into the world. Thinking of taking up this hobby yourself? Dolores’s only words of advice for this was, “Do it because you want to.” Information and guidelines can be found on http://www.sphcs.org/VolunteerOpportunities. Who knows, maybe you’ll be the next Dolores and knit 1,200 caps yourself. Imagine the reward.

One thought on “Dolores Belanger”