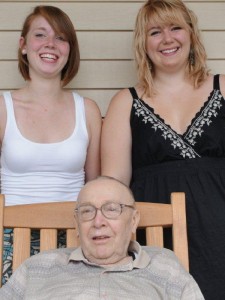 In 1941, the United States found itself amidst the chaos of a world at war and many young males from all walks of life were being called into service for their country.  We recently had the opportunity to sit down and talk with a War World II veteran, who came out of the war with his own unique story to tell.

Jim Kester, now 84 years old, grew up in a small town called Orchard Park, just south of Buffalo. Here, Mr. Kester lived and worked on a farm with his family for the first eighteen years of his life, until he was drafted into World War II in 1944. Although it was well known to the public that the war would soon be coming to an end, Mr. Kester was immediately sent for basic military training at Fort Belvoir in Virginia. At Fort Belvoir, Mr. Kester learned basic military knowledge that would help him with the duties he would later be asked to perform, both in the States and overseas.

During this time, President Franklin Delano Roosevelt was serving his fourth straight presidential term. Having helped the country overcome The Great Depression and serving as a strong leader during war time, he was loved by many Americans, but it was apparent that he was becoming older and his health was failing. On April 12, 1945, Roosevelt suffered a stroke while resting from a presidential tour in Warm Springs, Georgia, causing his death at the age of 63. At this time, Mr. Kester was still in training at Fort Belvoir. As soon as the news of the president’s death reached Washington, military personnel from all over the Washington D.C area were being recruited to serve on the presidential Honor Guard.

Mr. Kester recalls having to wake up early the next morning and being told that everyone was to put on their dress uniforms because they would be participating in the funeral procession. Dress uniforms included wearing khaki pants, which Mr. Kester remembers were a bit uncomfortable on that unusually warm day. He and the rest of his company were loaded onto military trucks, which brought them into Washington D.C. Every truck assigned its soldiers to a street, which in Mr. Kester’s case happened to be Pennsylvania Avenue. The entire route from the train station to the White House was lined with military personnel, each showing their respect for the former president. The soldiers stood for what seemed to be forever, waiting for the train carrying FDR’s body to arrive.  His funeral procession was very ceremonial, with the casket being placed on a horse drawn caisson, a two-wheeled wagon normally used to carry artillery ammunition. Thousands of Americans stood along the streets as well, mourning the country’s loss of a great president. A funeral was held at the White House while Mr. Kester went to Fort Myers .

A more lighthearted memory that Mr. Kester had to share with us from this day occurred when all of the military personnel were eating dinner at Fort Myers. Before they sat down to eat, they had stacked their rifles, barrels up, in a field near the entrance. It began to rain as the men ate, causing them all to rush out the door in a panic at once, attempting to save their rifles. To this day, Mr. Kester still chuckles remembering the image of everyone running out of the fort trying to grab their firearms.

After dark, Franklin Roosevelt’s body had to be moved back to the train station, where it would be taken to its final destination of Hyde Park, New York. The ceremony was a motorcade, which is a procession of automobiles used to transport the body.  Mr. Kester remembers how, even though segregation was prevalent at this time, hundreds of African Americans followed the train as Roosevelt’s body left for New York.

When asked about his feelings regarding his service in the Honor Guard for the funeral, Mr. Kester said that Roosevelt was a very well-liked and respected President, but as far as the actual ceremony, he saw it as more of a duty.

After the ceremony, Mr. Kester returned to Belvior where he was stationed to continue his basic training, which included digging foxholes and practicing for combat, and everything resumed as normal.  It wasn’t long before Mr. Kester found out he would be stationed in India as part of the China, Burma, India (CBI) theatre of World War II.  When Mr. Kester was notified of this, he wasn’t upset or worried, because it was well-known that the war would soon be over and his duty overseas would be more of a clean-up operation than physical combat.

Much of today’s generation isn’t aware of the CBI theatre or its significance in World War II, although during war time it was highly publicized. China and Burma experienced much more fighting than India, and in the mid 1940’s India’s territory included what we know as present day Pakistan. Mr. Kester was sent to numerous stations throughout India including Karachi (Pakistan), New Delhi and Calcutta. Each of these stations soon closed after Mr. Kester’s arrival and he was last stationed at Casablanca, which was where he stayed until his time in the military ran out.

We were interested to find  out how Mr. Kester was able to keep in touch with his family at home. Letters were the obvious connection to home, although at first many letters were censored for any sensitive information. Eventually, things loosened up and it wasn’t so difficult to write home anymore. In fact, Mr. Kester’s mother wrote him a letter for every day that he was gone, but when we talked to him, he admitted that he didn’t keep up with these letters as well as he should have.

While in India, Mr. Kester’s main job was to make trips from the hospital and around the city, transporting officers and the battalion commander. The most vivid memory of India for Mr. Kester was the different modes of transportation that he saw in the cities. There were horse drawn carriages and four wheeled carts that they called “Garys” and “Tongas”. He said that these were useful to get around the city, although many times the soldiers didn’t use them.

In Casablanca, Mr. Kester received news that his father had been injured on his farm back in New York, and he was able to take a two week leave from the army. His father knew a woman in the Red Cross, who was able to pull some strings to make his trip home happen. The two week leave that he initially received was extended to a month and Mr. Kester was sent to a rehabilitation center in South Carolina.  From the time Mr. Kester was drafted, until his leave from India, he had spent two years in the army.

At the time, the war had a huge impact one Mr. Kester’s family, even though he wasn’t involved in direct combat. When we asked Mr. Kester if he felt confident that today’s generation appreciates and understands the overall impact of World War II on this country, he replied with, “I’m afraid they don’t.”  It’s been over sixty years since the war has ended and several generations have passed. Many people today don’t know anyone who had served in World War II, so we were extremely appreciative to have the opportunity to hear Mr. Kester’s unique story of his role in American history.