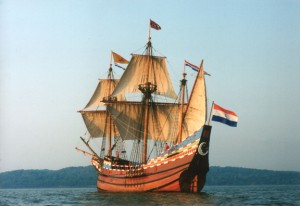 Lori S. Liebert and her husband Robert Van Vranken have become a huge part of the replica ship The Halfmoon. The Halfmoon was a Dutch ship from 1609 that was one of Henry Hudson’s ships. Henry Hudson the captain of the Halfmoon was originally sailing to find a Northeast, all-water route to Asia when he discovered America and was traveling up the Hudson only to realize it was an inland water route. People created the replica of the ship because it was a big part in the finding of America and an important part of our history. Lori and her husband got involved with this program because of her husband’s Dutch heritage and her love for history. Because of her husband’s Dutch heritage, they received the New Netherland’s Museum letter where Lori learned about the Halfmoon ship. Before Lori and her husband got involved, the replica of the Halfmoon ship hadn’t been back to Albany and the Hudson where it once used to travel. When Lori and her husband found out about the ship they emailed the captain about bringing the ship to Albany “to increase the understanding of Dutch settlement, exploration and history in our area; and to show the significance of this history today, not only for children but for adults, too.”

The replica of the Halfmoon is really interesting because it gives people a lot of opportunities. It gives people an opportunity to learn more about the history of their own area and learn the significance of it. Not only is it a learning experience, but people can become apart of the Halfmoon. The Halfmoon, when running, worked well with a crew of 20 people, but there’s been a lot more people involved with this ship. The ship has a few staff members: about three full-time volunteers, about eight interns every quarter, and two or three new crew members every season that join in on the sailing and the touring. Not only do they have all of these workers and helpers, but they also have about 50 teachers that have sailed with them and 1500 people who have qualified as crew. It’s been estimated that 250,000 people have boarded the ship since 1999 showing how significant this ship really is.

This is especially significant to Lori Liebert and her husband because they made it possible for over 1500 capital region 4th and 7th grade students and some faculty members including 100 students from our very own Joseph Henry Elementary School to visit the ship on April 11th 1999. With all the budget cuts that have taken place and the cancellation of field trips, Lori took matters into her own hands and funded the trip to the Halfmoon herself making sure the kids were able to participate in the experience.

The replica of the Halfmoon has become very well known. The Halfmoon has been in three movies; Squanto, Scarlet Letter, and The New World. Not only has it been in movies, but the Halfmoon was on one of its voyages with many middle school students during the tragedy of 9/11. They were anchored two miles below the World Trade Center; this was the same day the original Halfmoon laid at the very same site 392 years earlier. The kids on the ship got to help in working as a team to get the ship underway and get it out of harms way.

Because of Mrs. Lori S. Liebert’s undeniable passion for history she continues to stay involved with the Halfmoon. She has such a love for history and her husband’s Dutch heritage but it goes farther than her love for it. She wants to share the knowledge and the great and unique experience with others and let them learn about it and take pride in their history too.

For more information about the Halfmoon, visit the http://www.halfmoonreplica.org/ website.