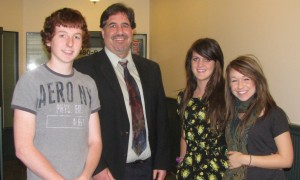 Ever since Mark Mahoney was a young boy, he had two goals in life: to win the Stanley Cup and to win a Pulitzer Prize. Although the Stanley cup is “more of a dream” as Mohoney states, the Pulitzer Prize is an award he’s never dreamt of receiving. Mahoney writes editorial pieces for the Glens Falls Post Star and enjoys rollerblading as his main past time. However, it was his editorial writing that led to his fame, not his “skills” at rollerblading. Mahoney is a family man and seems to derive a lot of his inspiration from his kids. He prides himself in his ability to “get the community involved in their local government” and that is what led him to receiving his Pulitzer Prize. You can view his award citation at http://www.pulitzer.org/citation/2009-Editorial-Writing . Mahoney received the prize for his “relentless, down-to-earth editorials on the perils of local government secrecy, effectively admonishing citizens to uphold their right to know.” Mahoney admitted that he enjoyed this investigative type journalism. He always wanted to make a difference in his community.

Mahoney told us the rather humorous story behind his success: “Well my boss entered a series of five of my articles for the Pulitzer but I didn’t expect any outcome.” His articles included such heated topics as, political corruption and misallocation of funds. Mahoney expounded by saying that he “completely forgot about the fact that he had even entered his articles” and that “the idea seemed so extravagant that he played the thought off as nothing”. A few months passed and Mahoney was buying a soda just outside the Post Star when he was called in by his boss. The intentions were kept a secret by those in charge and Mahoney was actually nervous that he might lose his job since many had with the recent drowning economy. When he entered the room his boss said, “You did it”. Mahoney responded perplexed and confused, “did what?”. Mark Mahoney, the small town editorial writer, was left speechless after he managed to receive the most prestigious award a writer could possibly receive.

Mahoney has had a love for writing since he was in elementary school.  He and his friends used to make their own newspaper filled with rumors about kids in their school and sell them for a penny a piece on the school bus.  One of the weeks they were selling their paper, the Washington Post and New York Times were both on strike and the kids bragged about how they had higher sales than the two most popular newspapers in the country.  He also used to have a binder filled with short stories, plays, and drawings he made throughout his childhood.  Although he spent so much time writing, he had never planned on writing for a living, let alone working on an editorial section of a local newspaper.  He thought it would always be one of his passionate hobbies, and thought he would be a DJ or radio spokesperson. Throughout his writing career at the post star, Mahoney tried to avoid the cliché editorial pieces such as those describing healthcare and objecting to the war in Iraq. Mahoney understands that he needed to write about things that affected people personally, and that is why he is successful.

He attended Ithaca College and had worked for the school radio station, eventually becoming the director and supervisor. He just so happened to receive this position when the previous director graduated. Though Mahoney thought his future career path seemed to be in radio, the winds shifted and he eventually became a writer. He focuses on local issues and writes for them to be heard and has encouraged people to have a voice because as he learned first hand, one person can make a difference.