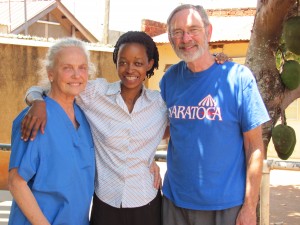 Paul and Jean Phillips traveled to Zimbabwe in the mid 90’s for recreational purposes. While they were there, they instantly fell in love with the landscape, the lifestyle and the African people. When Mr. Phillips was about to retire from his job as a college financial officer in 2001, he and Mrs. Phillips decided to return to Africa. This time, Paul stated that they wanted to return “less as tourists, and more to learn the culture, and to be involved in the culture.” With this in mind, they decided that volunteering would be the best option to fulfill their ambitions.

Since Google didn’t exist at this time, Paul resorted to an old-fashioned internet source, and typed in “volunteer Africa.” After receiving hundreds of responses from his search, he e-mailed fifteen different organizations, and one establishment in particular stood out from the rest. This group was AOET Uganda, and the couple would be the second volunteers to travel to AOET Uganda.

AOET was founded by Sam Tushabe in 1995. The letters stand for AIDS Orphans Education Trust, but it is also referred to as “Action for Empowerment.” When Sam was very young, both of his parents passed on, forcing him to live with extended family. His family couldn’t afford to send him through school, so he made his own money to begin his schooling. After his education was complete, he realized how many people were in a situation very similar to his own, and he wanted to help them.

AOET is a non-profit organization that works to enhance care for orphans and vulnerable children who have been affected or infected by HIV. Uganda is the primary location for AOET, but it has expanded to Kenya, Zambia, Botswana and Rwanda. At AOET Uganda, there is a primary school, a secondary school, a children’s village, a health clinic and corporate offices. These different aspects of AOET Uganda have developed over the time that Paul and Jean have traveled there, and are continuing to develop to this day. For example, over the ten years that the Phillips have traveled to Uganda, they have watched the school’s enrollment grow from 40 students to 600 students.  The schools at AOET Uganda have developed to be among the highest ranked programs in the district. Paul said, “These are kids that you wouldn’t expect to do well academically; since there seems to be a strong relationship between money and doing well.” Despite this preconception the children enrolled at the schools have scored in the top percentile of the nationally ranked test that they are required to take at the end of their 7th year of education.

One of Paul and Jean’s contributions to AOET is bringing a team of volunteers each year.  Each team has something unique to offer.  A few of the tasks that the teams perform include; painting, teaching, interviewing sponsored children, construction and medical care.

Of the nine trips that the Phillips have taken to volunteer in Uganda, one of their most memorable was their second trip when they traveled with their family. Jean said that traveling to Uganda with her two daughters and granddaughter was very special to her, and Paul agreed enthusiastically.

Although AOET is a prosperous organization, there is still room for improvement.  The Phillips believe one of the most crucial advancements would be making AOET Uganda financially self-reliant.  Some of the employees often go months without payment because AOET relies primarily on donations.

It’s obvious that Paul and Jean have developed a love for volunteering in Uganda, so when asked what it is that keeps them going back, we received many reasons.  The response that stood out from the rest was the people they’ve met and bonds that they’ve made with them.  Paul says that Uganda has become a second home to them.  The satisfaction that they get from giving Ugandans hope adds to their desire to return.

One thought on “Paul and Jean Phillips”